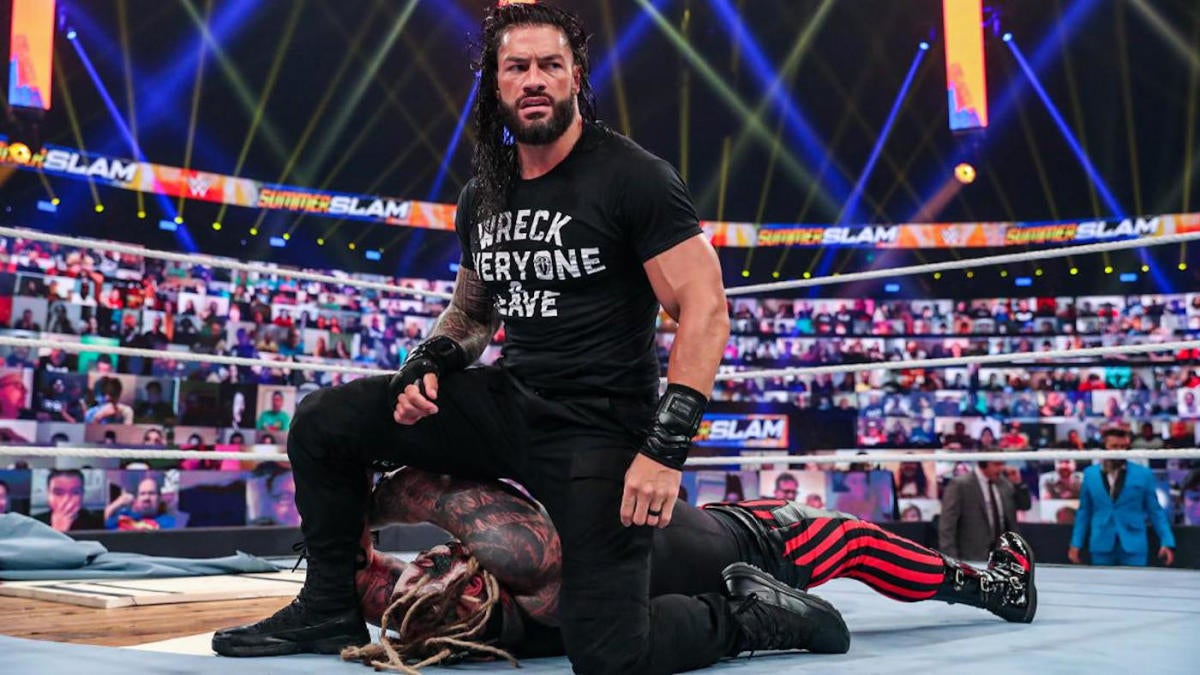 WWE made the interesting decision to stage the Payback pay-per-view just one week after SummerSlam, so it was clear that the card would have to come together in short order. With SummerSlam now in the books, the build began immediately as the event will take place on Sunday, Aug. 30 (7 p.m. ET, WWE Network) from the WWE ThunderDome inside Amway Center in Orlando, Florida.

Things did begin to develop on short order, starting with the Aug. 24 edition of Raw. After injuring WWE champion Drew McIntyre, Randy Orton will face off with Keith Lee in Lee’s first match as a part of the Raw roster. Also, Roman Reigns will wrestle for the first time since March, facing universal champion Bray Wyatt and Braun Strowman in a no holds barred, triple threat match for the title in the marquee bout of the evening.

Read on for what we already know about Sunday’s pay-per-view and what else we can expect to see on the card.

Universal Championship — Bray Wyatt (c) vs. Braun Strowman vs. Roman Reigns (No Holds Barred): WWE is wasting no time putting Reigns into a title match after his shocking return to attack both Wyatt and Strowman after the SummerSlam main event. The trio will sign their triple threat contracts on Friday’s edition of SmackDown.

Women’s Tag Team Championship — Bayley & Sasha Banks (c) vs. Nia Jax & Shayna Baszler: It was announced prior to SummerSlam that Bayley and Banks would defend their tag titles at Payback. At SummerSlam, Bayley was able to retain her SmackDown women’s championship against Asuka, but Banks lost her Raw women’s title to Asuka later in the night. Tensions are continuing to build between the duo and a lost of their tag titles could push things over the edge. Baszler and Jax took a break from their own issues on Raw to agree to team up and try to win the belts.

United States Championship — Apollo Crews (c) vs. Bobby Lashley: Crews thoroughly proved he is better than MVP in earning the victory at SummerSlam, so now it’s time for an even tougher Hurt Business test. Seven days after defeating MVP at SummerSlam, Crew will put his U.S. title on the line against the “All Mighty” Lashley.

Randy Orton vs. Keith Lee: While it initially seemed like Orton would again challenge McIntyre in a rematch for the WWE championship, three punts by Orton during the Aug. 24 Raw took McIntyre out. Lee and Orton mixed it up on that show, but their match ended when McIntyre interfered. After seeing the third punt send his friend to the hospital, Lee made it clear he wanted another shot at Orton, which he’ll receive at Payback.

Intercontinental Championship — Jeff Hardy (c) vs. AJ Styles: Hardy picked up the championship from Styles on Aug. 21, but there was a bit of controversy as he landed a kick that connected his metal knee brace — a product of a Styles cheap shot earlier in the night — that set up the finish. Neither man wrestled at SummerSlam, but the kickoff show did feature a video package about the situation. A rematch for Styles to try to get payback would only fit the theme.

King Corbin vs. Matt Riddle: What seemed like it was setting up to be a SummerSlam match never made it onto the card. That is likely because of the need for some stuff to fall through to Payback. While Riddle had a small series matches with AJ Styles, Corbin has been his true first feud on the main roster. After a series of sneak attacks and Corbin putting a bounty on Riddle’s head, it’s time for a one-on-one match.

Big E vs. Sheamus: Another situation that has been building has been the tension between Big E and Sheamus. Big E won a singles match after some distraction on Aug. 21, but it wasn’t a clean win and leaves open the opportunity for a rematch. The issues between the two really began as Sheamus mocked Big E for trying to rally the locker room against Retribution. Sheamus remains a solid option to really kick the Big E singles push into the next gear.

Lions plan to release receiver Marvin Hall a month after his first 100-yard game, per report

Top 5 Reasons You Should Be Playing Cornhole