FRISCO, Texas — The 2021 NFL draft is a few months away, but there already seems to be a path for the Dallas Cowboys to help their defense this coming season.

The scouting process has many more chapters to play out, especially without the traditional combine and pre-draft visits, so a tried-and-true draft board is not close to being finalized, but with the No. 10 overall pick, the Cowboys could have the chance to take the best defensive player available.

In his latest mock draft, ESPN’s Todd McShay has the Cowboys selecting Virginia Tech cornerback Caleb Farley. Get to know his name well. Same with Alabama cornerback Patrick Surtain II. In the seemingly never-ending mock draft season, those names will be commonly linked to the Cowboys.

Needing an upgrade in the secondary and potentially losing cornerbacks Chidobe Awuzie and Jourdan Lewis to NFL free agency, Farley and Surtain — or Surtain and Farley depending on your preference — would not only fill a need, they would fill a requirement.

But let’s not focus on cornerbacks alone. Let’s look at the other possibilities at No. 10, while understanding the Cowboys need to improve a defense that allowed the most points (473) in franchise history in 2020.

What about drafting a quarterback?

If the Cowboys don’t have Dak Prescott signed to a long-term contract by the draft, selecting a quarterback in the first round could make sense. Maybe there will be scenarios in which Justin Fields (Ohio State) drops a few slots or they truly love what Trey Lance (North Dakota State) can become as a pro QB. (Forget about Clemson’s Trevor Lawrence and BYU’s Zach Wilson at No. 10, probably Fields, too, because they will be off the board by then.)

How does drafting a quarterback improve the Cowboys in 2021? The Green Bay Packers were criticized for taking Jordan Love at No. 26 overall last year when they had Aaron Rodgers playing at a high level and under contract.

The Cowboys would be creating more than a quarterback controversy by doing this. They would be telling everyone this is Prescott’s final year in Dallas.

Could best player available be the best route?

The Cowboys did that in 2020 by drafting wide receiver CeeDee Lamb at No. 17 overall. None of their mock drafts had Lamb available when they were selecting, but he was too good a player to pass up. And Lamb delivered as a rookie, catching 74 passes for 935 yards and five touchdowns — a rightful heir to the No. 88 jersey.

Taking the best player available is never the wrong answer, but that doesn’t always make it the right choice. Florida tight end Kyle Pitts could be that guy, and he would be more than a tight end for any NFL team. But, do the Cowboys need another offensive weapon with a unit that would already have Ezekiel Elliott, Amari Cooper, Lamb, Michael Gallup, Blake Jarwin, Tony Pollard and Dalton Schultz?

Could Cowboys go after an offensive tackle?

This move would fall in line with the best-player-available theory, to a degree, but a case can be made the Cowboys do need a tackle. La’el Collins did not play a snap in 2020 because of a hip injury. Tyron Smith played in two games before undergoing neck surgery.

Smith remains one of the NFL’s best tackles, but the Cowboys have to think of a future without him. Smith, who is 30 and is entering his 11th season, missed three games each season from 2016 from 2019. There is a lot of wear and tear, but if the neck surgery corrects a problem that has bothered him the past couple of years, then Smith could return and taking a tackle that high to play a handful of games would not help immediately.

Keep an eye on Northwestern’s Rashawn Slater, who opted out of the 2020 season but showed in 2019 he can be a dominant lineman. He is considered the second-best tackle behind Oregon’s Penei Sewell.

The last time the Cowboys drafted a first-round tackle that high was Smith with the No. 9 pick overall in 2011. Before Smith, Dallas had not selected an offensive lineman in the first round since 1981.

Draft a defensive lineman at No. 10? 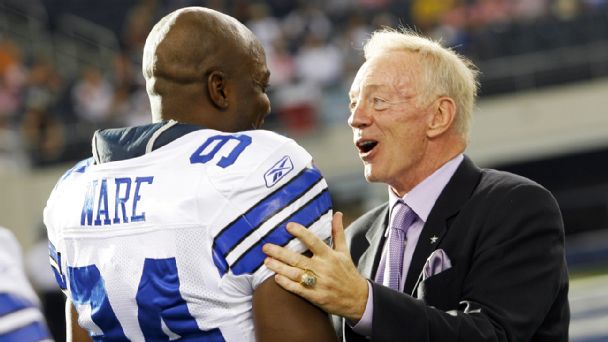 • Next Cowboys who are up for HOF
• Cowboys’ rank in Super Bowl timeline
• Get Up: Dak left off Dallas hype video?
• Cowboys, Prescott still not close to a deal

This could lead the Cowboys to a trade-back scenario to acquire more picks, but they would have to hope there is a player who will garner enough attention to be worthy of a move up. If conventional wisdom holds on prospect rankings, then linemen such as Alabama’s Christian Barmore, Georgia’s Azeez Ojulari and Michigan’s Kwity Paye or Miami’s Gregory Rousseau would be options.

What about a linebacker or safety?

At linebacker, Micah Parsons would be the most logical player. The Penn State product has lobbied on social media for the Cowboys to select him. Parsons opted out of the 2020 season but is considered a great athlete with a ton of potential.

If the Cowboys keep linebacker Jaylon Smith, there’s no reason to make this move. If Dallas moves on from Smith, it makes more sense, but is this still too high at No. 10 for an off-the-ball linebacker?

The Cowboys have not made safety a priority in years, either in free agency or the draft. Will coordinator Dan Quinn help them rethink that approach?

The safety class appears to be strong, but none worth taking at No. 10. Even a second-round draft selection at safety would be a major departure from how the Cowboys have operated at the position in recent years.

2021 NFL Draft: What the Falcons failed to do, and one thing Atlanta definitely got right

2021 NFL Draft: What the Cardinals failed to address, and the pick Arizona knocked out of the park

2021 NFL Draft: What the Broncos didn’t do, and one thing Denver definitely got right

Yankees’ Luke Voit expected to rejoin lineup ahead of series vs. Rays

Three reasons why Angels have dropped to last place in AL West, including an underperforming pitching staff